My partner Geoff, two friends and I have just completed an amazing journey traversing the length of the High Atlas Mountains in Morocco. Our trek was book-ended by the two highest peaks in North Africa, Mt M'Gouna (4068 m) and (Mt Toubkal at 4200m ) joined by roughly 250klm of rough tracks over 3 weeks hard walking. Geoff organised the trek online through a local company based in the small village of Imil located beneath Mt.Toubkal. Mohamed was the man who runs the company and he wasn't big on communication.

We arrived in Marrakech a day before the start still unsure if it was all going to come together. Mohammed was frustratingly bad at responding to any form of contact so it was with great relief when he actually turned up at the appointed hour with our guide, Omar who turned out to be an even poorer communicator. He did, however, know the route well, which was a relief.

After a bit of phaffing around in Marrakech organising last minute supplies, off we headed to the start of the walk 6 hours drive away where we met our crew, the four muleteers, all named Mohamed. Each Mohamed had a mule which carried all our equipment and supplies for the duration of the journey. To distinguish each we nick-named them, (with their good-humoured agreement), Mohamed A,B,C and D. The mules were much easier.....Daisy-doo-dar, Silver Ghost, E.J Hoover and Taffy were the names we each nominated for our favourite.


Watching the set-up of the first day's camp was interesting. Those of you who know Geoff and me personally know we've both done a bit of trekking over the years so we have certain expectations as to how things should be done. For example, having staff who know how to erect tents, having a toilet tent, having a dining tent equipped with table and chairs, having tents that are water and wind proof were some of our expectations that, sadly, were not met.

On the positive side the food was fabulous with Mohamed-A cooking up a storm 3 times a day, although we did get a bit tired of tagines by the end of the walk! Unintentionally, the start of the trek coincided with the start of Ramadan which had a bit of an impact on the walk. Ramadan lasts for a full month which meant our poor guys couldn't eat or drink between sunrise and sunset. Some days we all walked for 10 hours, climbing 1,000 metres in 35 + heat -  the guys cheerfully going without even a sip of water in that time while still catering to all our needs. By 7.30pm (the average time of sunset) they were well and truly ready for their first (non-alcoholic) drink and food.

As for the walking, well it was pretty tough at times as you can see from the state of Geoff's boots which started to fall apart after only day 5. Copious amounts of Superglue applied each evening, along with our full supply of sports tape, kept the boots together just long enough to make the finishing line.

Our days generally started at about 4.30am when we would get up, pack up, have breakfast and be on the track by 6.00am to take advantage of the cool morning conditions .  Lunch was usually around 11.00am or so and into the campsite by 2.00pm to 3.00pm. The walking after midday usually was pretty uncomfortable because of the heat, which is not surprising given we were walking close to the northern edge of the Sahara. 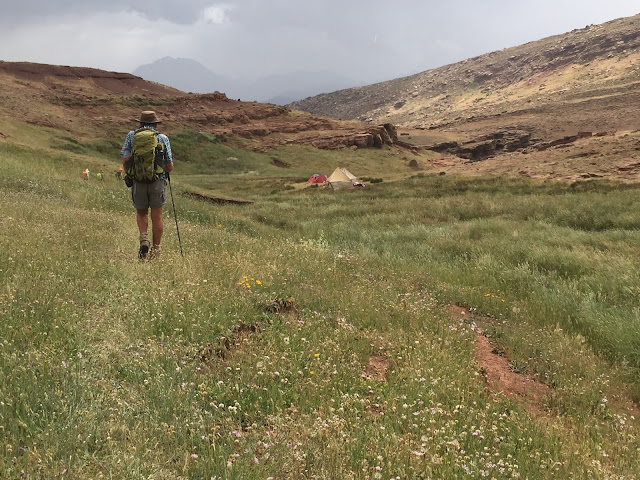 Geoff heading into camp just before the afternoon storm

The landscapes were sensational, a bit like Ladakh on steroids. You wouldn't call what we were walking through 'wilderness'  (I don't think there is any left in the Atlas Mountains, because everywhere in summer has some form of human activity going on), but despite that the countryside was extremely wild, and a long-long way from the conveniences we're used to in the west. The route essentially followed footpaths that connected one village to the next and we were probably never far from the gaze of a shepherd or muleteer carrying their harvest back to the village or Berber families simply going about their domestic life, herding goats and sheep from the low valleys up into the mountains to take advantage of the lush summer meadows. We were really struck by the lack of mechanical equipment for farming and how the Berbers still wear traditional clothing and the villages have virtually no advertising or marketing signs anywhere. It really was like stepping back in time, apart from the ubiquitous satellite dishes on many homes.

Another highlight were the lush valleys in which many of the villages are situated. Many an afternoon was spent reading a book under the shade of a three hundred year old walnut tree and listening to the dirge-like calls to prayer from the village mosque (although admittedly this did get a bit tiresome at 3.00am each morning!) 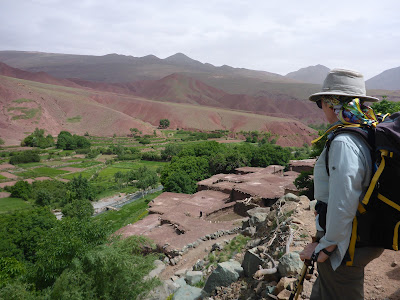 In all a fabulous journey with great comraderie and many wonderful experiences (like sharing our dining tent with three shepherdesses - grandmother, mother and daughter, during the searing heat of one afternoon), great food, challenging scree-sloped mountain-side trails, thunderous afternoon storms and brilliant sunrises and sets. Not much more you can ask for.... except perhaps.... some great shopping to finish off the trip. Did I mention yet what beautiful things there are to buy? Berber carpets, filigree-metalwork lamps, embroidered leather shoes and bags are just few of the things I managed to squeeze into the bags for the homeward journey.

Ours was a tailor-made itinerary organised online over approximately 6 months after years of planning by Geoff. There are a number of trekking companies in operation, but compared to the Himalayas, the trekking industry in Morocco is very rustic.

Anyone who'd like detailed info on what we did please feel free to get in touch by email via the Contact page.. 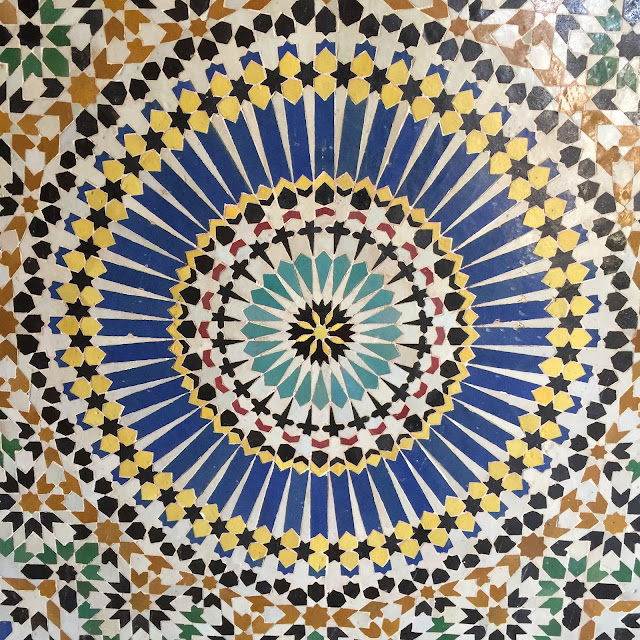 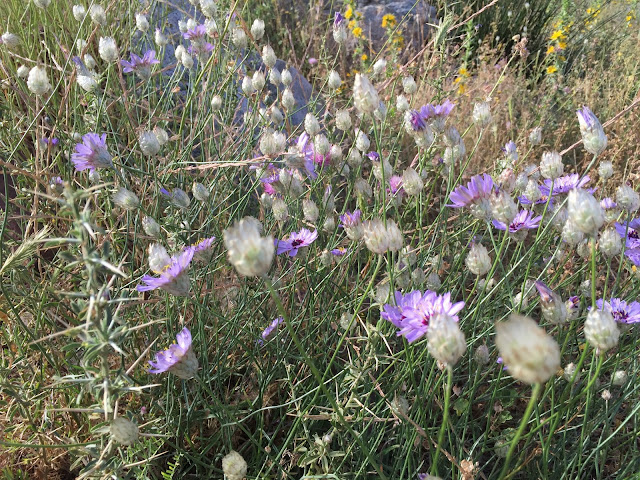 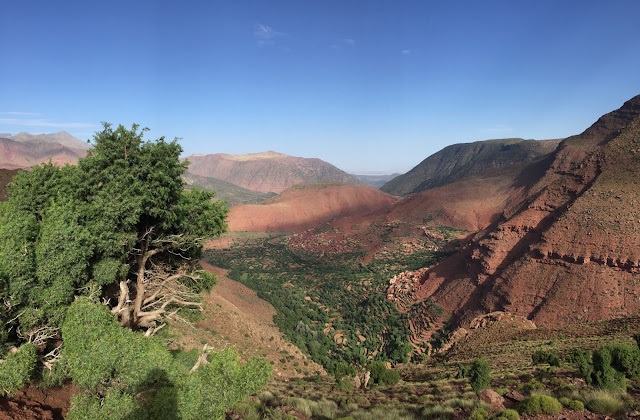