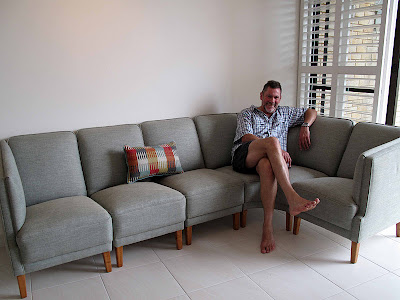 Some of you may remember a post earlier this year about this commission, 'The Oslo Settee'. Well, it's finally finished and was delivered to its new home overlooking Sydney harbour yesterday. Here it is being tested by its happy owner, John.
The new cover is a Warwick fabric called Chai Atoll - a modern linen-composite which is a gorgeous bluey-green and delightful to work with. The original upholstery was kept, but the springs re-tied, webbing and padding replaced and legs re-finished (originally they were a dark mahogany).
A few scatter cushions will be added, in the same Warwick Anthropology fabric as shown. 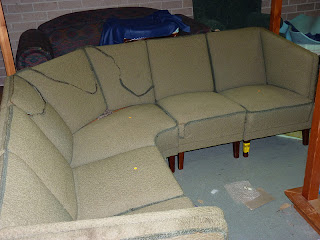 
This 5 piece modular setting has an interesting provenance. John's parents lived in Oslo in the early days of their marriage, and bought this shortly before moving to Australia in the early 1950's. John's mum says that it was the bees-knees of modern furniture at the time - real cutting edge stuff. The covering was a mossy-green carpet-like fabric (very heavy) and the seams were covered by a glued-on gimp, which as you can see, had largely fallen off. It spent its whole life in the family home at Fairlight (just up the road from its new home) and apart from the cover, was in excellent condition. They don't make frames like this anymore! Nor does meadow-hay get used very often these days as a filling - when I stripped it the smell of a Norwegian summer day 60 years ago spilled out into the studio. 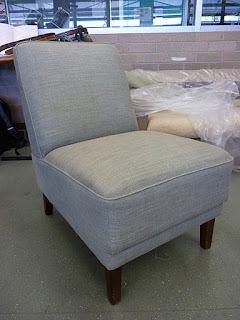 Thanks John, for entrusting me with this - and I hope this re-upholstery job lasts as long as the first!

RAPT! is up and running! 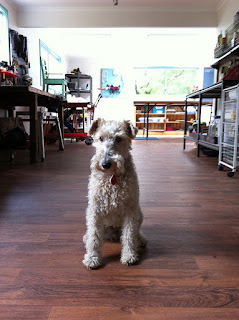 It's been a busy few weeks moving everything back into the workshop, building racks, shelves, & cork/peg/black-boards, re-organising all the long-stored supplies & furniture, but at long last - we're in.
There's still the outside painting and some landscaping to do before we can say it's actually 'finished' but it's just wonderful to have Bottoms' End officially back in production.
(Please keep your fingers crossed that we don't have another flood like the last one). 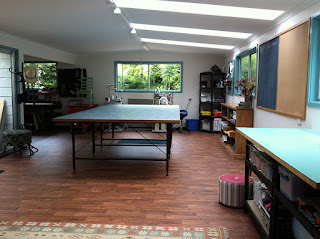 There are 2 sections to the workshed: a 'clean' end for fabric work (centred around the big, light-drenched cutting-table) and a 'dirty' one for wood-working. 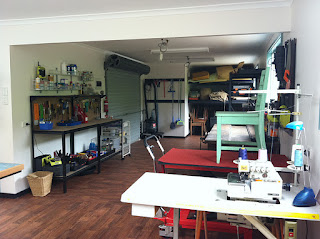 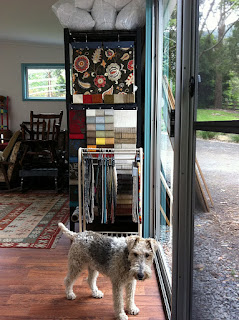 Miss Snupeson's role as Project Manager has unfortunately become redundant, but after lengthy negotiation she has agreed to take on the role of Customer Service Manager. Here she is waiting at the door to welcome clients.
Posted by The Chairy Godmother No comments:

I've just discovered this great group: the Creative Womens Circle (CWC - nothing to do with scones or date-loaf!).
The CWC is a website and series of speaker and networking events for women working in creative industries to share information, inspiration & ideas.
It sounds like an excellent way of networking (the blog-osphere at its best I reckon!) and I'm only sorry that at this stage it's Melbourne-centric. However the co-ordinator, Tess McCabe, tells me she has plans for expanding the group into NSW in 2012. Let's keep our fingers crossed. 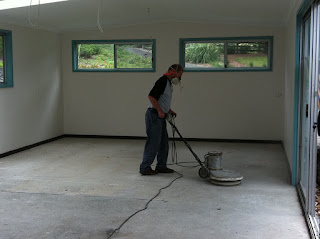 Ahh... nearly there.
Interior painting done; floor laying & electrics should be finished today.
Hope to be moving in by end of week! 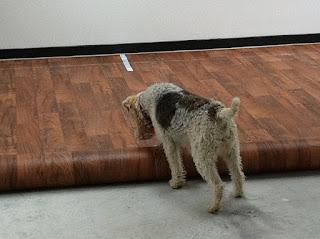